First Read Through of Antigone

Tonight is the first read through of Antigone. I’m excited, engaged and full of anticipation. The first read 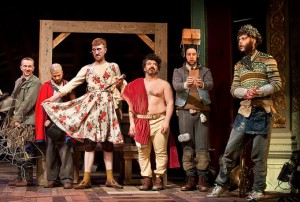 through of a new Theatre Project is a tradition, a necessity, a revelation, a ritual and a harbinger. It is the moment where everyone comes together for the first time and takes the first step in the process of making a play. In larger theatre companies it is a bit of an event. At the New York Shakespeare Festival, when I was there, the event was marked with bagels and coffee, and everyone from every creative department would attend. At small companies and pick up productions, the first read through happens sometimes at people’s homes or in small rehearsal spaces. It’s not a rehearsal but rather it is a declaration of the existence of a collective. 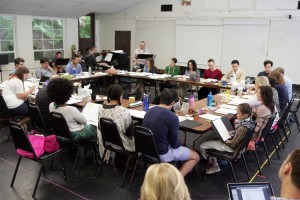 The director will open with a few remarks. The Stage Manager will say a few words about housekeeping matters. Sometimes the producers will speak. Stage Management will sometimes arrange the seating around the reading table in order to afford the best view of the proceeding for the artistic team and the lead actors. Among the actors this is the first chance to see and hear each other. It is also a time for renewing old acquaintances and sizing each other up. Yes, I said it. It is during the first read through  that the actors begin to make judgements about each other.

“Gee, he’s taller than I thought”
“Is she REALLY going to do it like THAT?”
“I saw her in that other thing, Damn she is good?”

This is the moment when we all start to find out the truth about each other, about the play, about how the process will go forward. Tonight I’ll be joining with a pick up company of young people who, according to the producer, mostly trained in the SF Bay Area. I was raised in the Bay Area and have only worked there once. I’m eager and anxious and curious and maybe just a tiny bit nervous. It has been a long, long time since I have walked into a rehearsal room as purely an actor. I’ve been doing the “actor-slash” dance for longer than I care to admit. As I am likely to be the oldest in the company there will be certain expectations of me. Some of them I will have to live up to, others I will have to overcome. That process begins at the first read-thru.

One thing for certain. This play is going to rock the Hollywood Fringe Fest.  Get your tickets early. This one is going to sell out.

← An Artists Daily Practice
Mind Your Own Part →