GUN – More Than Just a Film

Gun. What an experience! Gun is a labor of love and passion 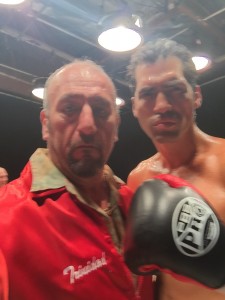 brought into the world by a fellow names Sam Upton. Sam wrote the screenplay, and is directing and starring in this film about redemption and never giving up on oneself. Sam really impressed the hell out of me. To any one of those hats is very demanding, but all three? Amazing! I guess what struck me most about Sam is his level of enthusiasm about film making. The set of GUN was high energy and happy and fun. I will remember the experience for a long time to come.

The role I played in GUN was small but crucial. Trinidad Sanchez comes from Cuba and is one of those guys who occupies a place in the fight game, developing new boxers and breathing new life into the careers of boxer who have lost their way. While that sounds like an honorable endeavor, there is nothing good and pure about the way Trinidad goes about his business.

I did a lot of research on boxing, the business, the people, the culture. Sam suggested I check out the Wild Card Boxing Club. I did some googling and found it on Vine street not far from the Hollywood and Vine metro station. I also found out that this boxing club is owned and operated by Freddie Roach, the great boxing coach and trainer who has trained world class boxers, especially Oscar De La Hoya, Miguel Cotto and the great champion, Manny Pacquiao. I decided to jump in the water and grabbed a metro train to Hollywood. I found Wild Card and was pleased and surprised to find Freddie Roach himself sitting at the reception desk of the club, running the day to day. I walked up to him, introduced myself and explained, “I’m an old man who wants to learn the fundamentals of boxing and appreciate the sport more”. In no time at all Freddie set me up with a trainer, a club membership and a pair of hand wraps. I came back the next day and began to learn.

Boxing is a grueling and fascinating sport. The pure physical demands are really, really daunting. I would suggest that anyone who wants to practice boxing first get into pretty good shape just to survive a training session. A boxing workout is broken into rounds. A three minute round is followed by 1 minute of rest. In a boxing gym there is a timer running at all times, it signals exercise and rest periods for the whole gym and most people will conduct their workout accordingly. For me a workout would begin on the treadmill for 20 mins or so just jogging and getting warmed up. During this jog I’m stretching my shoulders and shadow boxing. At the appointed time my trainer Paulie calls me over and wraps my hands. The hand wrap is crucial. Without a proper hand wrap a sprained or broken hand is almost a certainty.

Once wrapped I’ll do a couple of rounds of shadow boxing. Then the training gloves are put on and we begin 5 or 6 rounds of mitt work. The training gloves are 14 to 16 ounces and it can be a challenge just to keep your guard up for 3 minutes, let alone, throw punches, move lightly about the ring, and bob and weave. One of the first and most important lessons a boxer must learn is to breath. That may sound simple but in the unfamiliar, demanding and violent environs of the boxing ring, even something as simple as breathing must be learned. I found that, as I was throwing punches and defending myself I would hold my breath. In a very few seconds I was gasping for air and unsure of my footing. I would struggle to get through the round, and then barely catch my breath before the minute of rest would expire and I was back to “getting busy”, and I would hold my breath again. Paulie showed me how to exhale on the punch and create a physical rhythm that would govern my breathing, movement and timing of punches. In time I was able to get through the round with much less struggle. The workout would continue with a couple of rounds on the heavy bag, the speed bag, the crazy bag and then a lot of abdominal exercises. Strong abs are very important in boxing, not only to make it possible to take body punches but to make the upper body more mobile when slipping and dodging punches.
Before and after workouts and during my treadmill sessions I would just sit and soak up the atmosphere. Wildcard Boxing club is a small, stuffy, smelly collection of boxing equipment and boxing practitioners. Men and women of all sizes, shapes and social standing come to Wildcard boxing club and pursue the challenges of the “sweet science”. What I came to understand quite quickly is that Boxing is a martial art, like Karate or Judo or Tae Kwon Do. But is is also a physical practice like yoga. No one every masters yoga, they just practice at ever deeper levels. So it is with boxing. While there are boxers who have tremendous skill and speed are still students.

I was always impressed at how polite everyone is in the Wildcard Boxing Club. I mentioned this to one member, a man called Bo, (my name is Bodine but everbody call me “Bo”) a large, powerful and heavily scarred fighter who had been coming to Wildcard “forever”. He explained quite simply, “…well a course folks is polite up here. If you rude to people round here you could get yo ass kicked…”

Women and men train together at Wildcard, but there is not flirting or fraternizing. Everyone is there for one thing…boxing.

My the time I was finished with a month of training I have a sprained hand, sore muscles tight abs and a much deeper appreciation for this much misunderstood sport. Now that GUN has wrapped I’m seriously considering doing some more boxing training. My interest has been peaked. Stay tuned.

← Two Planks and a Passion
Vital Signs are strong…. →