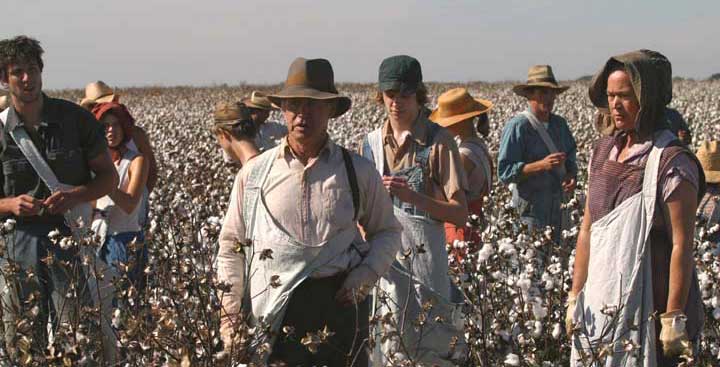 One good and genuine moment in every Oscars telecast is the “In Memoriam” montage. It’s a bittersweet reminder to us all that life is brief, glory is fleeting, that the memories we make with and for others and the work we leave behind are what endures.

When I was a boy I spent a lot of time with my cousin. He was so much cooler than me. My aunt and uncle took all my cousins to the movies all the time. One weekend my cousin told me about this amazing and scary western he had seen called High Plains Drifter with Clint Eastwood. He described the scary plot with the mysterious stranger, and the hellish frontier town, and spent a lot of time describing the villain “Stacey Bridges”, his look, his evil deeds, his death, his last words, “Who are you!?, who are you!?!”. I asked  my cousin who the actor was who played the villain. He replied, “I don’t know his name, but you’ll recognize him when you see him.”

Geoffrey Lewis (left center), between takes on the Hallmark film, A Painted House. 2002

A couple of years later I saw High Plains Drifter, recognized the villain, remembered his eternally sad, somewhat grumpy countenance, his reedy voice and his utterly frightening blue eyes. He showed up in a lot of Clint Eastwood movies, and on television. His was a face that I never forgot and it seemed like he had been acting in movies forever. He was Geoffrey Lewis.

Years later I had the sincere pleasure of working with Mr. Lewis on a Hallmark film called A Painted House. We played farm workers picking cotton in the south. He was a pleasant, funny and interesting man. He had many stories, and many interests. I enjoyed the experience of meeting him and working with him. After that film wrapped I was always delighted to see him on screen on television. We met one more time in the waiting area somewhere for an audition for something, I don’t remember what, only him and his gentle way. We spoke a bit about the fun that was had on that Hallmark movie and, when we parted, wished each other well. Later on I heard he was ill, and was saddened to learn that he passed away in April of 2015.

On his IMDB page there are over 200 credits, 84 of them for films like , Heaven’s Gate, Bronco Billy, Tom Horn, The Great Waldo Pepper, The Way of Gun, and on and on. He spent most of his life working in our industry and made a huge contribution.

I was sorry that he wasn’t accorded a few seconds on the “In Memoriam” montage during the 2016 Academy Awards Presentation. Despite that omittance, Geoffrey Lewis is remembered, by me, by the thousands of other professionals he worked with over a long career, and millions of people who shivered when he was scary, laughed when he was funny, and wept when was piteous. He will be not soon forgotten.