Big day on set today. A harrowing scene involving Rebel soldiers terrorizing a busload of Americans they have kidnapped. We had them in a thatched roofed shack and were shouting in their faces, pushing them around and just generally causing havoc. All well and good until one of the hostages started fighting back against our oppression. He swung at me and missed, I thought it was on purpose, I supposed he had made the actors choice to be the “defiant” hostage. I respected that and opted to take our improv further. I took him by the shoulder and held him at arms length. I cocked by fist and hesitated. Then I called one of my henchmen and told him to “take this one outside”. My guy took hold of the “rebel” and got a sock in the eye for his trouble. The “thwack” of the collision of flesh and bone was unmistakable. There was a pause and the my henchman broke the silence with “Excuse me, I don’t think he’s supposed to hit me”. Outside the director yelled “cut”. 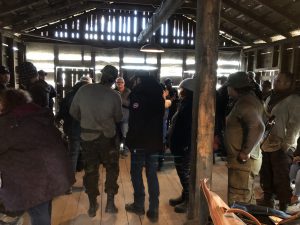 As ever there were two sides to the story and the poor guy who threw the punch was aggrieved and angry and frightened at the way he was being treated. He came to the set unprepared for the kind of moment we were playing. The Director took charge of the situation and got everyone calmed down. He’s a really sweet guy and very actor friendly. There was no bad blood between the two actors involved and I didn’t even mention the punch I slipped seconds before the one that landed. The day ended well and the extra with the mean right cross stayed on. Twenty years ago he would have been sacked. It’s good to see that the industry has evolved in some way. And frustrating to know that some of the people with power in our business are still abusing that power. 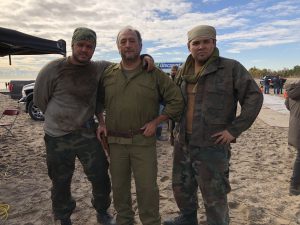 Loving Toronto. I could definitely spend a lot of time in this town. The people are friendly and welcoming. The city is clean and modern. The food is fresh and varied and delicious. And the beer is cold, cold, cold.

One more day of shooting tomorrow, and an early morning flight on Tuesday. Hopefully I’ll have some time to catch the Dia De Los Muertos festival at Olvera Street.