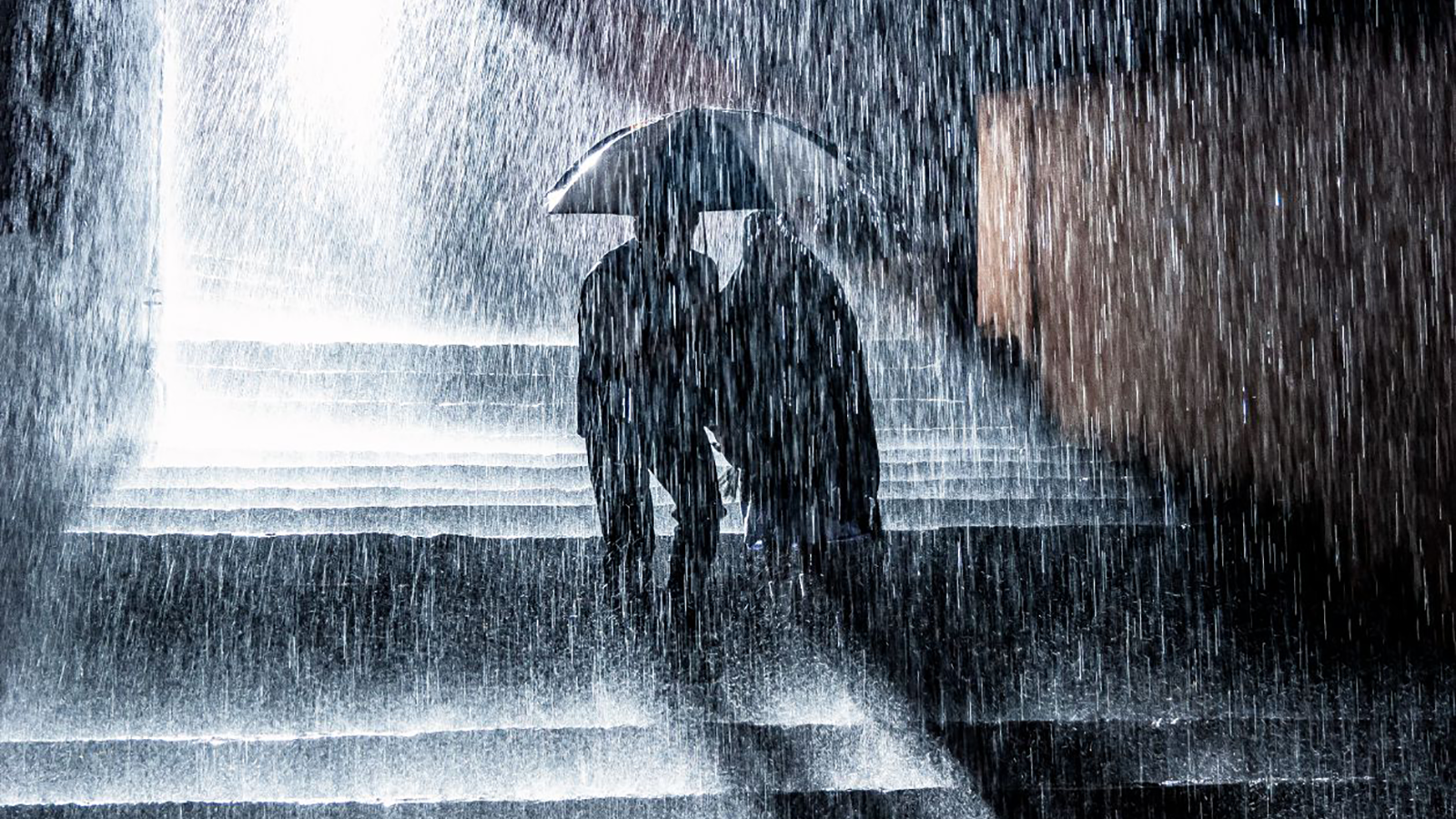 It rains in New York in the summertime, heavily and often. There is no rhyme or reason, no warning, nothing to do about it but prepare to get wet… even on stage at the Delacorte. There is no roof on the Delacorte theatre, only sky. Since the Delacorte opened in 1962, the companies who have played it have developed a deep well of institutional knowledge on how to cope with a rainy evening in New York City.

Preview #5 started energetically and well in the cool of the early evening. As the sun set the skylight morphed from amber to azure as Othello and Brabantio fought a war of words over the heart of Desdemona. Desdemona made her own case though and Brabantio had no answer save to offer his parting shot to Othello and retire from the stage.

At that point in the story, my work as Brabantio is complete. I only two more appearances on stage in the performance, as a drunken Cypriot soldier singing in a tavern and as that same soldier arriving at the scene of the killing of Roderigo. So while waiting for those appearances I sit with my colleagues in our shared dressing room and swap stories, read, write and relax, all the while keeping track of the progress of the story onstage piped in on speakers throughout the backstage area.

We had just kicked off the second half of Othello and the Moor was confronting Desdemona about the handkerchief he believed she had given away, when there was a pause and then a roar and applause from the audience. I thought it might have been because of another raccoon sighting, but that seemed unlikely as the scene being played was very dramatic. Moments later we heard our production stage manager announcing a rain hold and asking the actors on stage to take cover from the precipitation.  Our policy on rain delays is that we will make every effort to complete the show, even going so far as to perform in light rain or drizzle. However a heavy rain will stop the show. Our stage management team knows to the minute how long it takes to tell our story. A rain delay will last only as long as it would take to finish the show by midnight. The midnight deadline is mandated by the city of New York, the Central Park Conservancy and the NYPD, it is not negotiable. So if there is twenty minutes of show left to play, then a rain delay can last up to 11:40PM before the show will be cancelled. The delay lasted about 15 minutes, much of it used by the stage crew to squeegee rainwater off the stage. Our PSM announced that the show would continue and a grateful audience cheered and returned to their seats. We started part 2 again and when we reached to moment where Othello asked for the fateful handkerchief the skies opened up again and our PSM stopped the show.

Now we were looking at the real possibility of a cancelled performance. We had barely enough time to reset and complete part 2 before midnight. If we managed to get going again, a third cloudburst would guarantee a cancellation. The rain persisted and we were all watching the clock. The optimists among us stayed in costume, the pessimists began quietly preparing for an early evening. Company Manger Liza Witmer, in a wet rain slicker, came smiling through the dressing rooms, congratulating us on our first rain delay. The decision to keep going ultimately rests with James Latus, our production stage manager. He consults closely with Liza Witmer our company manager and the production management team. As they were deliberating the rain abated and the stage crew came out with their squeegees. They were working fast and hard. We were just about out of time. James got on the public address and announced that we were going to continue, and then announced to the cast that we were going to start at the very line where we had stopped. I looked up at the clock, continuing now meant we would finish at 7 minutes after midnight. We had to hurry but we could not rush. The 600 or so audience members who stayed through the second delay deserved the best show possible.

We continued. We played with our hearts. The audience members who stayed locked back into the story and we played the hell out of it for them. At the curtain call we bowed to the standing ovation offered by our rain soaked audience and then we applauded them in return. It was five minutes past midnight.

James, and Liza wanted to continue and felt that going past the deadline by 5 to 10 minutes was not too heinous a sin, however they could not make that call, they lacked the authority. So Liza got on the phone to our artistic director Oskar Eustis and explained the situation. Oskar gave his blessing and allowed us to finish past midnight. I can only assume that he had to make some phone calls of his own after making that decision but that is another story.

Preview #6 tonight, will be the last show of our first week of public performances. Then we take a day off. As you can see, there drama aplenty onstage and off when doing Shakespeare in Central Park.