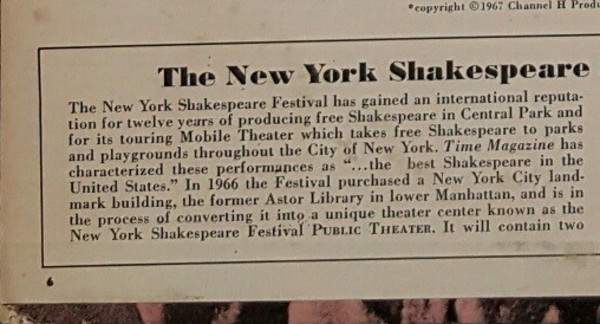 Got to town today 37 years after my first arrival in New York City. Today I arrived on a flight paid for by my employer, and was met by a very polite, liveried, driver who grabbed my bag and carried it to a shiny black SUV that he used to ferry me to my destination on the Upper West Side, not far from Lincoln Center.

In 1981, I arrived on a flight paid for by my parents, toting all my worldly belongings in two suitcases. I hopped a shuttle bus that took me to the Port Authority Bus Terminal where, upon arrival, I had to fight to hang on to my bags that were being grabbed at by more than a few hungry eyed street types. From there I walked to my friend’s apartment in the heart of Hell’s Kitchen. It was a shotgun flat that he shared with a large rat. On the floor above was a madman who screamed all night every night about how he wanted to “cut their heads off”! I slept on a couch he had rescued from a trash pile on a lucky Tuesday night (garbage night).

I might as well have been resting my bones at the Plaza Hotel. I was thrilled, energized. I was overjoyed. I was spending my first nights in New York City. For a mexican boy from south San Jose, that was like spending the night on Mars. My friend told me I had exactly two weeks to find a job and another place to live. Why? His girlfriend, a ballet student at Julliard, who had appeared in the movie FAME, would only be amorous with him in his place ALONE. I was very much a spanner in their sexual works that could only be tolerated for a fortnight. She was very beautiful and very athletic and they were both young and full of life. I promised to clear out with all haste.

Two days later I had a job at an east side ice cream parlor, I lied through my teeth about my vast waitering experience.  A week after that I was living in  a room at the Belleclaire Hotel on 77th and Broadway. I shared a bathroom with 5 other rooms, one occupied by another young and amorous couple who had a thing for long, candlelit baths.

Today was much easier, much more polished. I’m a grown man, established, mature, seasoned. Accommodations were arranged and paid for with ease, sans limits or ultimatums. And yet, the excitement I felt as the hired car approached the city, the skyline growing closer, was every bit as butterfly inducing as back in 1981.

I’m going to make a point of telling you all about the adventures of today and  yesterday as I rehearse and perform my part in Othello at the Delacorte Theatre.

A colleague pointed out to me that the company producing this show has not been called the New York Shakespeare Festival for a long time. He should know as he is, himself, a producer of classical theatre in NYC. However, when I finished my employment in the 2016 run of Troilus and Cressida at the Delacorte in Central Park, I received a letter from my employer for the purpose of applying for unemployment. In the letter the official name of my employer was… The New York Shakespeare Festival. 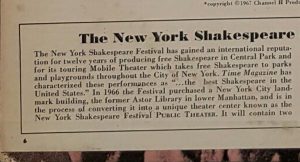 ← Another Turn on the Delacorte Stage
Diet and Exercise →