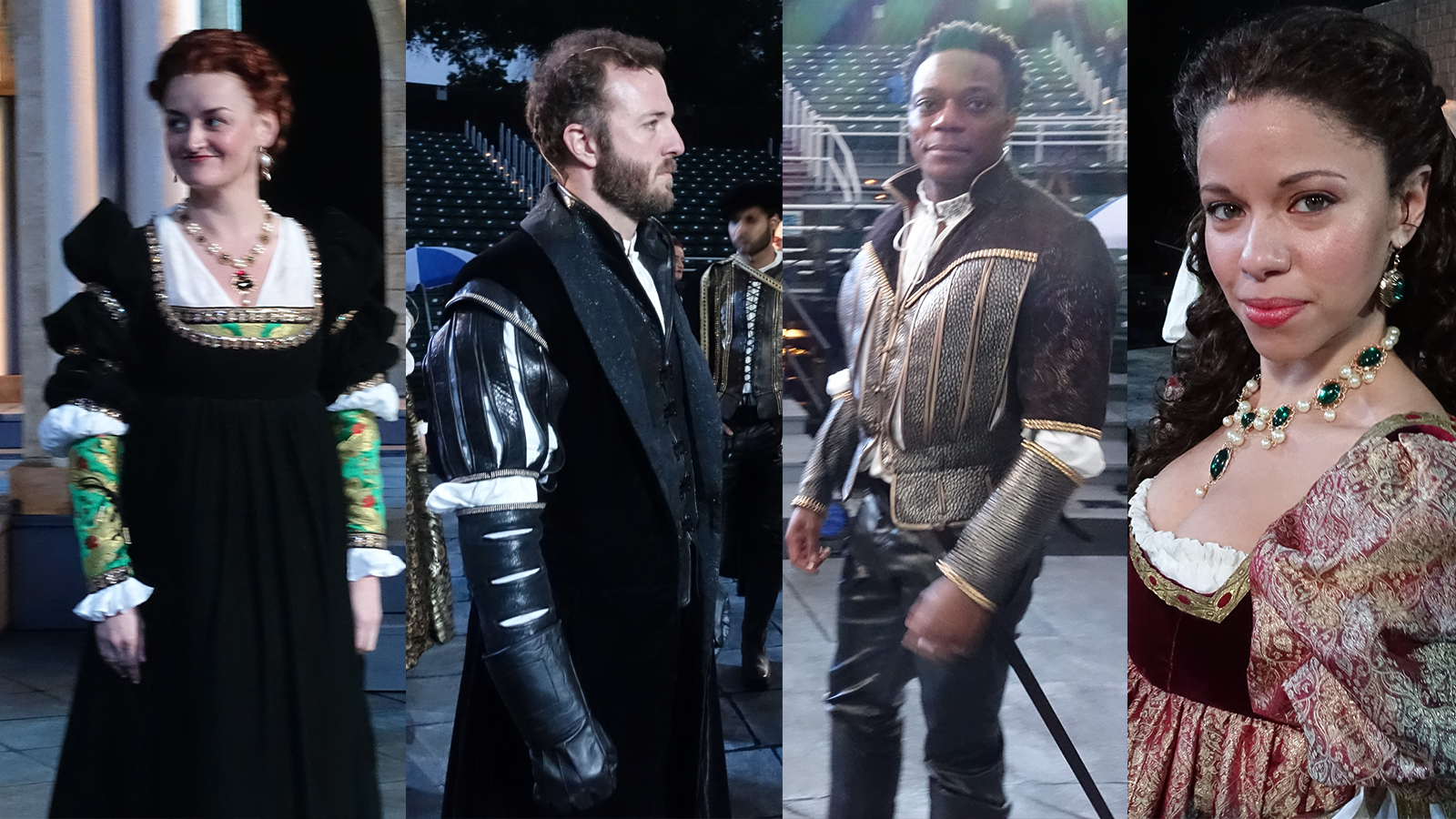 After a final run thru on Saturday we took two days of much needed rest. We took the time to recover from 6 days of demanding rehearsal and prep, and also to charge up our energy reserves for 6 long days of technical rehearsal, two of which are to be “ten for twelve” days. all the other days will commence at 2:00pm and end at midnight.

Last night was our first night on the Delacorte stage. We were slated to rehearse in the afternoon but rain kept us in our dressing rooms. After the dinner break the weather improved and we donned our costumes and wandered out onto that historic playing space. It felt so good to be back, looking out onto all those seats, 1800 of them, knowing that most or all will soon be filled with people from all over the world who have come to central park to experience a moment they have heard about, read about, and perhaps even dreamed of.

Dreams will be coming true on stage and off. There are several Delacorte veterans in the company and a host of first timers. All of us have dreamed of walking this stage. That is why we are here.

Our costumes, under the lights look fantastic. We’re all arrayed in silk, gold brocade, linen, polished wool, velvet, leather and fur. These days the fashion is to mount Shakespeare productions in just about any period BUT the Elizabethan. Our Othello has a definite, “old school” look to it. It’s a refreshing return to a somewhat ignored style.  The set is spare and grand, two rows of gothic arches fashioned to look like cut stone.  It’s a big set, that is clearly meant to contain big, beautiful and truthful storytelling. The scale of the set is such that we need our big sumptuous costumes in order to be seen by the audience.

Backstage as we waited for the weather to turn, we took to story telling and reminiscing. A number of colleagues have left us in the last year or two. That very afternoon a memorial was being held for the late, great Reg E. Cathey, who passed away earlier this year. Many of us wanted to go but could not due to rehearsal. Reg would have understood. We all understand that the work comes first and that no goodbye is forever. It’s likely we’ll see Reg, Tommy Derrah, Margaret Whitton, and a whole cast of longtime players on another stage, on another plane. We’ll tell more stories together, stories that don’t need to be heard, or seen, only felt.

We hit that stage with energy and zest and even though we were in new clothes, in a new space, being stopped and started and paused and restarted we elevated the telling of the story. Our nature is to play a space and this space demands our best playing, those empty seats were 1800 question marks behind a single question to which our company holds the answer. We were giddy with the power of that first night on stage. There is much work to do though. Many more discoveries to be made.

← The Big Run Thru
Tech: Putting on the Polish →