Since returning to the practice of acting full time, I’m finding that information I’ve picked up on my journey is all

starting to come together in new ways, and that I’m a more disciplined and serious actor than I was when I decided to become a serious, disciplined actor. What tipped me off? Daily Practice.

My master teacher Philip Meister had a clear idea about actor training and he put it this way,

I heard those words and understood the idea behind them but I still missed the importance of Philip’s idea and never really adopted the serious work ethic that it described. As a young actor starting out I was blessed and cursed with the ability to learn lines quickly. I was able to learn entire roles in a day and was always the first to put the book down in the rehearsal hall. The blessing? I never had to work hard on my script. The curse? I never had to work hard on my script. Because of that, I probably missed the boat on deeper choices, alternate readings, and a more powerful understanding of character, plot, and the arc of a story. 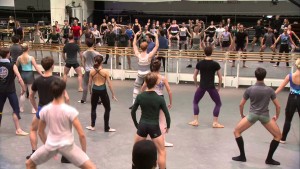 Now, 30 years later, I have to work a lot harder to learn lines. A LOT harder. Learning the role of Creon in Antigone demands daily study for several hours. I’m getting my mind around it but I know that if I miss a day of study I’ll not only slow progress, but I’ll actually lose ground. When I realized this I remembered something a classical musician friend said to me,

…and bells rang, lights flashed and I had an ah-ha moment. Philip Meister wasn’t just talking about training. His quote goes to the way a professional artist works. Serious professional musicians practice every day. Professional dancers take class every day. Actors have to practice their profession in just the same way. In order to do the the kind of work I want to do at the Hollywood Fringe Festival, I will have to work on the script every day from now until the day of the last performance. I’m already seeing the difference. The deeper story that we are telling is starting to solidify, and how the ancient greek story of Antigone relates to the world today is coming clear, and I we haven’t had the first rehearsal yet.

The moral of this story? I’m older, and if not wiser I am certainly starting to wise up.

FYI the Antigone performance schedule is as follows:

Tickets are $12 and can be purchased online here